Foundations for our Transit Future

Read the 2022 State of Transit in New Orleans report here.

2022 was a big year for our region’s transit and a big year for Ride New Orleans (RIDE). Important projects and developments laid the foundation for the future of New Orleans transit. After 3 years of engagement, the network redesign – New Links – that had transit riders, planners, and policymakers talking about our region’s transit system, has been implemented in both Orleans and Jefferson Parish. The Regional Transit Authority (RTA) went all hands on deck, moving from paper to pavement taking New Links to New Routes and beyond. In addition, Jefferson Parish unveiled a new name and look, going from JeT to Jefferson Parish Transit.

However, despite some improvements, significant challenges remain. Transit riders still have significantly worse access to jobs in the region compared to car drivers. And our transit system still lacks rider amenities such as transit stop seating and shelters. Agencies still don’t communicate effectively with all riders, and there is an ongoing need for better regional integration. This year’s report combines data analysis and rider testimonies to give a rider-focused assessment of New Orleans transit. It gives special consideration for young transit riders and lays out a vision of the world-class transit system our region deserves.

Read the 2021 State of Transit in New Orleans report here.

These accomplishments are impressive and have taken New Orleans region transit into the modern age – call it Modern Regional Transit V 1.0.

The problem, though it that it’s not enough. 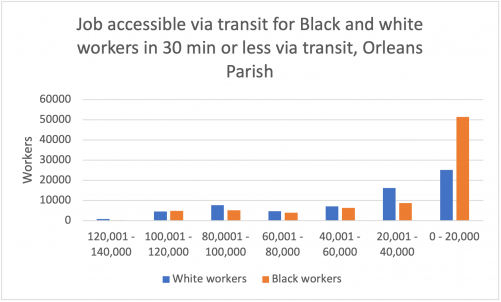 But how do we address these issues and bring truly equitable world class transit for the region? RIDE calls for the region to dedicate itself a concept we’re calling Modern Regional Transit V 2.0.

Taking action on Modern Regional Transit V 2.0 means improved policies both inside and outside of transit agencies.

On the inside, RIDE calls for the RTA to prioritize a more open and collaborative relationship with outside stakeholders to ensure a robust and growing coalition and expanding base of supporters. And Jefferson Transit should rethink its shortsighted decision to not implement some secondary New Links recommendations that would have helped the agency to provide more efficient and effective service to parish residents.

On the outside, it is time for a real conversation on additional dedicated local sources of revenue for transit service. The New Links team put together a scenario that assumes a 25 percent increase in annual operations budget that would significantly improve frequency and reliability and equitable coverage.

Achieving this vision is very possible – but it will take a dedicated coalition of not just the transit agencies, but also riders, a variety of local government agencies and elected officials, and the private sector. The region – and especially the City of New Orleans – should prioritize this. RIDE recommends first exploring the possibility of an Orleans Parish millage. For as little as $0.21 a day for homeowners at the median assessed value we could see truly world-class and equitable public transit in the city and region. 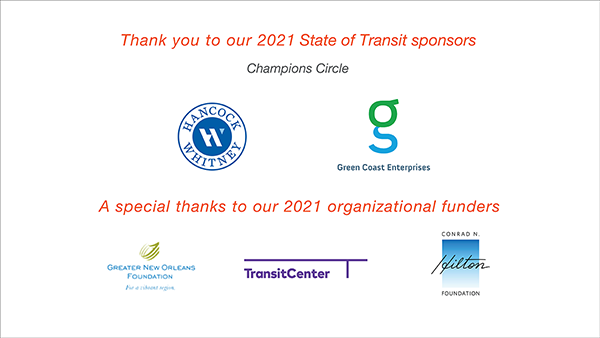 In the midst of the COVID-19 pandemic, Ride New Orleans presents our seventh annual State of Transit in New Orleans report. Key findings include:

Read the 2019 State of Transit in New Orleans report here.

Ride New Orleans presents our sixth State of Transit in New Orleans report, an annual examination of how the region is doing in providing bus, streetcar, and ferry service. Our key findings include: