Ride New Orleans is excited by a new RTA proposal to consider a six-month pilot program to test several ways to speed up the Canal Street streetcars. Read on below for why we think it’s so important to consider.

With funding always limited, a big way to fix that is to reduce travel time by making key transit lines more reliable and frequent.

The Canal lines may be the most important lines for the entire RTA system. They are critical for getting people to jobs in two of the region’s biggest jobs centers – the New Orleans CBD and Veterans Highway corridor in Metairie. They’re an indispensable connection not only for Mid-City residents but for residents connecting to the rest of the RTA system from New Orleans East, Gentilly, Broadmoor, the Claiborne Corridor and many other places.

But the status quo is not working.

While the distance from the Carrollton to the Harrah’s casino is only 2.7 miles, it takes an average of 34 minutes to travel that distance.

According to the schedule, riders should see a streetcar between Carrollton and Harrah’s every 10 minutes-or-less during most of day. But too often streetcars get held up by traffic or something else, leading to “bunching” where two, three, or more streetcars go by in an immediate row, followed by long waits for the next vehicle. This makes what should be our most predictable and reliable transit connector unpredictable and unreliable throughout much of the day, which is frustrating for riders and has negative ripple effects through the entire system.

How can we improve the status quo?

A recent RTA study indicates that consolidating stops and stopping vehicular crossings of Canal – outside of the area right around major intersections – could have an enormous effect, shaving off almost 13 minutes of travel time – or 35 percent of the average trip time.

That would have a huge effect for riders, would be a strong achievement for regional transportation equity, and would set the Canal lines up to be the first truly reliable high capacity transit line – something that a thriving and equitable region requires.

See the below map for a detailed look at one of the options proposed in the study. 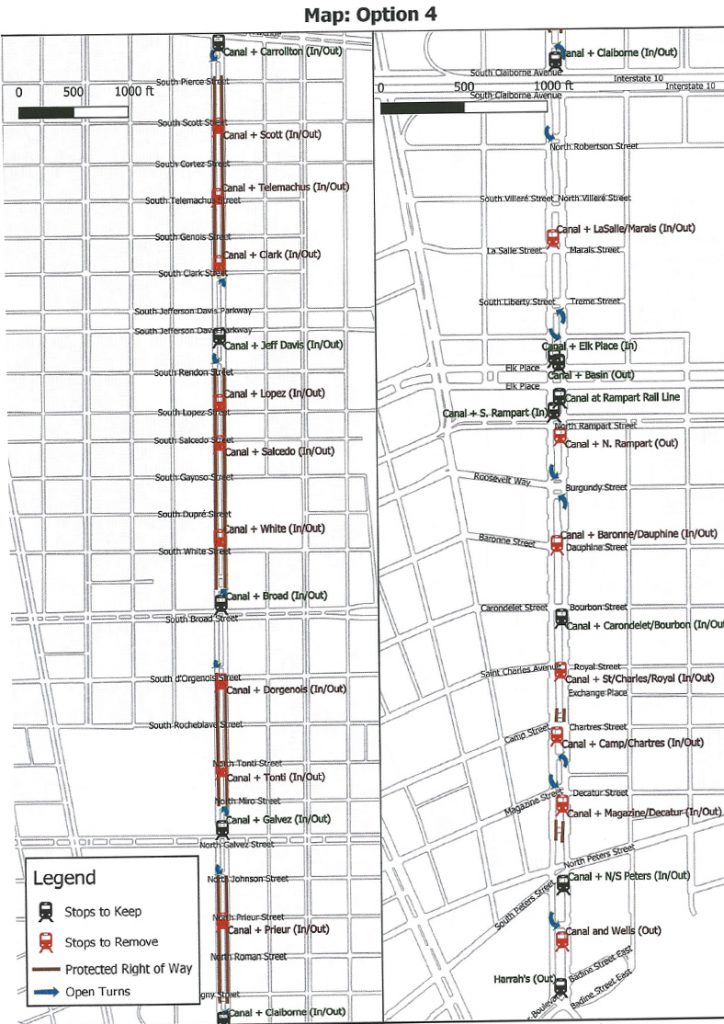 Is this going to inconvenience me?

For people taking transit, the remaining stops already make up a majority of the current boardings. Most riders who currently board at a stop slated for consolidation would have to walk at most an extra block or two. The longest distance anyone would have to go to a new stop would be a ¼ mile.

The RTA is in the process of doing a traffic study to make sure that the pilot won’t have significantly negative effects on vehicle flow. Preliminary analysis estimates that most people driving won’t see a noticeable difference, while people who currently use one of the crossings that could be closed would see one to two minutes at most added to their trip. In comparison, it’s important to remember that a rider going all the way from Carrolton to Harrah’s could save almost 13 minutes from their trip. That’s a significant enough potential that RIDE thinks it’s really important to test the idea out to see if it works.

Also, unsafe street conditions are a huge inconvenience to many people driving. As an added bonus, it’s likely that safety for people driving on Canal will greatly improve. Streetcar/vehicle crashes are all too frequent and the RTA estimates that we could see a 25 percent reduction in crashes with the pilot.

What about transit riders with limited mobility?

In the bigger picture, people with mobility challenges already unfortunately face many challenges on Canal Street. Canal is currently designed to prioritize high speed car flow. That means it ranges from difficult to near-impossible to access many of the stops that would be consolidated. For instance, the closest streetcar stop to the VA Hospital is almost impossible for someone in a wheelchair to get to as there are no accessible paths, no curb cuts, and no signals to slow down three lanes of speeding traffic on Canal. The only way to safely get to a streetcar stop is one block away at Galvez – a stop that would remain under the pilot proposal.

Fixing this overall situation and creating a more welcoming and safe atmosphere for those with mobility challenges and pedestrians in general needs to be a big priority for New Orleans.  Creating reliable, high capacity transit like this pilot program seeks to do is an important part of building that improve culture of safety and accessibility.

RIDE is focused on making sure that all riders – regardless of mobility levels – have effective, reliable, and accessible transit. A pilot program is a great way to temporarily try a new idea and see what works and what doesn’t, but still be able to adjust if the impacts on some riders are greater than anticipated.

How can I have a say?

While RIDE thinks this idea makes a lot of sense and that it’s in the best interest of transit riders and the entire community to give it a try, we also believe strongly in a robust public process.

That’s why we’re not only thrilled to see the idea proposed, but to hear that there will be several months of community engagement before any final determination is made.

There will be several RTA meetings and hearings devoted to this in March, April, and May. Key moments include the RTA Riders’ Advisory Committee meetings on April 3 and May 1, both starting at 5:30 p.m. at the RTA building, 2817 Canal.

RTA staff are also reaching out directly to neighborhood groups and other organizations in the Canal Street corridor to make sure everyone understands what’s being proposed and has a chance to have their say.

The Mid City Neighborhood Organization will devote their April 8 meeting to this discussion. That meeting is at Warren Easton High School, 3019 Canal St and starts at 6 p.m.

No final decision is expected before late May.

If you like what you read in this proposal, please sign our petition asking RTA and city leaders to support the pilot!