We’ve had a busy few months here at Ride New Orleans. As summer heat heads into its final stretch and we can (almost) imagine the cooler weather to come, we want to get you up to speed on our highlights!

We released our third annual State of Transit in New Orleans report in late August. The big takeaway? We’ve made real improvements in the last two years, but we still have a long way to go – especially in providing access to opportunity for our neighbors who need it the most. The average New Orleanian with a car can reach 89 percent of our region’s jobs in 30 minutes or less. But relying on transit, that same person can only reach 11 percent of those jobs in 30 minutes or less. Read the full report here.

One million vehicle revenue hours by 2020!

To address this car/transit access disparity, we’re challenging the city of New Orleans and the New Orleans Regional Transit Authority (RTA) to commit to increasing service by 33 percent by the end of 2020. This can happen if the RTA aims to reach one million ‘vehicle revenue hours,’ or VRH – the amount of time that a bus, streetcar, or other transit vehicle is actively serving paying passengers. We’ve been on pace to reach that mark the last few years – but we have to keep seeing service enhancements annually! Learn more and sign our petition for one million VRH by 2020!

To cap off our State of Transit report release, we hosted a panel discussion on using transit to improve New Orleanians’ ability to get to jobs and other opportunities. Joining the panel were RTA GM Justin Augustine, RTA Board Chairwoman Sharonda Williams, HousingNOLA Executive Director Andreanecia Morris, and GNO, Inc. President and CEO Michael Hecht. Key discussion points included the need for greater regional transit connections, more housing that people can afford near convenient transit routes, and a look at projected regional job growth in the coming decades. Ride New Orleans board member and Speaker Pro Tempore for the Louisiana House of Representatives Walt Leger, III moderated. Check out pictures from the event on our Facebook page. 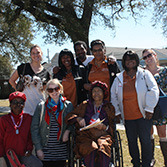 Throughout the summer we continued building our transit rider-led organizing campaign, the Coalition for Quality Transit. Coalition members helped with our St. Claude transit outreach efforts, discussed how to provide improved transit access to individuals with physical disabilities, and started planning activities for the rest of the year. If you haven’t already, please sign the Coalition for Quality transit pledge to show your support for better New Orleans transit. We meet every third Saturday from 10 am to 1130 am – email us if you’d like to become more involved! 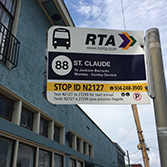 Earlier this year, St. Claude/Rampart bus riders were worried about a repeat of the Loyola streetcar situation when the new streetcar line opens. When the Loyola line started service, two buses that used to go to Canal – the #15 Freret and #28 Martin Luther King – were instead halted at the streetcar’s first stop – the UPT. This was a real time and money inconvenience that we didn’t want to also see happen to #88 St. Claude riders. To highlight the issue, we (and many of you) participated in the RTA public hearing process, gathered several hundred petition signatures, and attracted media attention. The end result – the #88 St. Claude will continue to Canal AND the #15 and #28 lines will be extended back to Canal in early October!

The RTA’s long-term strategic transit planning process will start soon, with an announcement of the consulting team to lead the process expected this fall. This will be a major opportunity for the community to shape the coming decades of New Orleans transit and improve frequency and connectivity in the next few years. We’ll have a lot more to say as things get rolling – please stay tuned and email us if you want to get more involved in this important process.