We need to talk about streets and how we use them. They make up more than 80% of public space in cities, and yet they are designed around cars and prioritize the movement of vehicles, not people. This means public transit like buses often takes a backseat.

Dozens of cities across the country are reconsidering buses, and dedicated bus lanes are a central component of their plans. Many see improved bus systems as an efficient and economical alternative to more costly options such as rail.

As we imagine what post-Covid cities look like, and with significant federal funds available for transportation and infrastructure, it is time for New Orleanians to look at our streets and see what we can do differently and better! Dedicated bus lanes are a great way to make cities more green, efficient, and fair.

Dedicated bus lanes are exactly what they sound like—lanes and spaces reserved only for transit buses. By reducing interactions with other traffic, these lanes help buses operate more efficiently and safely. There are many design options for bus lanes and the NACTO Urban Street Design Guide gives the following examples: 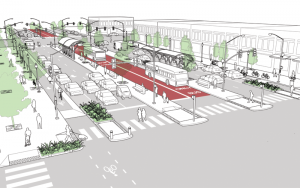 Anyone who has ever sat on an RTA bus waiting for traffic to slow so it can resume its route (or anyone who has attempted to pull onto a busy New Orleans street for that matter) can understand why dedicated bus lanes are important. However, just to be sure, here are a few of the benefits of bus lanes.

First, bus lanes are efficient. A single bus can move far more people than a car, or even ten cars. You may have seen an image comparing the space required for cars versus buses like this:

Research and examples elsewhere suggest that by moving more people in fewer vehicles, bus lanes can improve congestion in cities and reduce travel times for buses and their riders with only minimal impact on cars. In fact, bus lanes could create a virtuous cycle where improved service leads to more people taking transit and reducing the number of cars on the road.

Second, bus lanes can bring environmental benefits. Less time spent on the road and sitting in traffic means less fuel used and greenhouse gases emitted. Bus lanes also mean a more equitable city. Lower-income, minority, and other vulnerable groups are far more likely to rely on public transit. As RIDE frequently points out, this puts them at a significant disadvantage. The average transit-reliant New Orleanian can only reach about 37% of the region’s jobs in one hour while people in cars can reach about 99%. So, we are not really talking about giving bus riders an unfair advantage over car drivers, we are talking about reducing the huge advantages cars currently have over buses.

Furthermore, in comparison to other transit projects, bus lanes can be highly cost-effective and implemented relatively quickly. In contrast to a rail or subway project which involves significant capital and years to complete, a bus lane can be created almost overnight. In some cases, they require only paint, signs, and a few street installations. Many other benefits are possible, such as improving response times for emergency vehicles that may also use dedicated bus lanes.

Cities have a wide range of options when it comes to bus lanes. There is no one-size-fits-all solution so cities should adopt the designs that work best for them. They can create periodic bus lanes that are reserved for buses only during peak hours. Or they can opt for lanes that are always reserved for buses. They can also implement bus lanes that extend along an entire route or choose more limited interventions that designate space for buses only in certain, high-congestion spots. The level of resources required will obviously vary depending on these choices. On the lower end of the investment and commitment spectrum, we see peak hour lanes demarcated by paint and signs. On the other end, we find cities like Albuquerque and Cleveland which have built full bus rapid transit routes that are physically separated from car traffic and have central boarding stations.

New Orleans is in desperate need of bus lanes. Slow and unreliable transit is a big issue for people who ride the bus. According to RIDE’s “Hotel Workers Transit Survey”, over 60% of transit-reliant hospitality workers reported being late for work because of transit. Furthermore, low reliability and speed are major disincentives for people who might consider taking transit. Why would a car driver who can reach work in 10 minutes opt for an unpredictable bus ride that might take 30-50 minutes?

However, we are not proposing anything that hasn’t been considered before. The need for bus lanes has been recognized by the RTA in its Strategic Mobility Plan as well as City Government in its Transportation Action Plan. However, so far this recognition has not translated into action.

Bus lanes provide numerous benefits and only a few tradeoffs, so cities such as New Orleans should strongly consider getting in the bus lane game. Getting started can be surprisingly simple. Cities like Boston began pilot testing bus lanes by simply marking off certain street sections with traffic cones to test the impacts and reactions.

However, no single entity can make bus lanes happen alone. Implementing bus lanes in New Orleans requires coordination among multiple agencies—in particular the RTA as well as the Department of Public Works, Regional Planning Commission, and the Louisiana Department of Transportation and Development. A major first step is to identify and agree on “transit slow zones”—places where transit service is significantly impacted by congestion and poor road design that are suitable for intervention. This should not be difficult—the RTA could do it either by analyzing data or simply asking operators who drive buses every day.

There will undoubtedly be some readers who resist the idea of bus lanes or feel it’s unrealistic for New Orleans. Some critics may argue that New Orleans drivers won’t accept or won’t be able to handle the creation of bus lanes. It’s true there may be a learning curve and some resistance, but if the city gets serious about implementing bus lanes and clearly communicating the benefits, these issues can be mitigated. The same was true for bike lines which faced some initial pushback. Today, however, there are hundreds of bike lanes spread across the city. Others may ask how a bus lane can be added to New Orleans streets that already look full and crowded. First, we are not talking about adding bus lanes to every side street and alleyway, just some strategic transit slow zones. Second, many transportation projects are hard to envision until you actually try them out. A pilot test (for example using cones and transportable signs) can help the public understand bus lanes with almost no investment or resources.

Implementing bus lanes will mean facing some obstacles and difficulties, but that is true in every case. If dozens of cities across the country, big and small, can manage it, why not New Orleans?