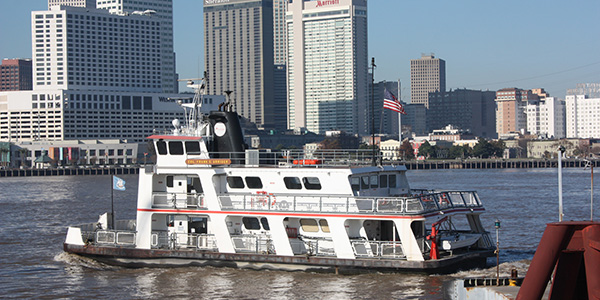 It’s been a frustrating fall for New Orleans residents who rely on the Algiers Point/Canal Street ferry.

As of today, the ferry has been out of service for almost 60 consecutive days, replaced by an unreliable “bus bridge.” that has to fight traffic both ways on the Crescent City Connection. And that’s on top of months of on-again/off-again service earlier this year.

This ongoing frustration for riders is the result of a number of years of poor management and bad strategic decisions. Both existing boats that serve the line are considered unable to carry passengers without significant repair. Meanwhile, both new ferry boats that were expected as early as Spring 2018 are still unable to pass Coast Guard inspections and begin serving riders.

RIDE is as frustrated as anyone over this situation. It’s been especially disappointing as it comes in tandem with the chaotic move of the downtown transfer center to Duncan Plaza after the collapse of the Hard Rock Hotel building. Service problems associated with that move have caused significant hardship for transit riders who went weeks without being able to rely on the schedule for a number of RTA lines. As one of our supporters put it the other week, “this has been the worst month to be a New Orleans transit rider in a long time.”

But frustrated as we are, we’re more interested in seeing restored service and then forward progress  instead of unnecessarily playing the blame game. With that in mind, we wanted to update RIDE members on where the situation is at currently and what to expect between now and the end of the year.

Currently, there are three potential resolutions that would get ferry riders back to a normal schedule:

Our understanding of the status of each of these (as of November 25) is as follows:

With these constraints in mind, the RTA is hoping that either the existing or new boats will be ready by the end of the year, rather than commit that much additional money to the situation.

As frustrating as all of this is, RIDE is inclined to give the RTA the benefit of the doubt – for now. Years of mismanagement led us to this situation and mean that there is no easy way out. We shouldn’t excuse the situation, but the new management team at the RTA inherited a bad situation when they took over on September 1 and they deserve a limited amount of patience as they try to fix the situation.

But that patience should only hold up until early January – at that point at least one of the above options needs to be in effect.

In the meantime, the RTA also needs to focus on the following:

Increase service on the bus bridge: The current bus bridge frequency of every 30 minutes matches up with the scheduled ferry departure time, but the travel time does not. Instead travel times are significantly longer. Increased frequency is the least that the RTA can do for riders to make up for that inconvenience.

Be transparent: The RTA needs to continue being clear and transparent about the status of each of the above options so the public knows what to expect moving forward.

Develop clear long-term plans for success: The RTA needs to have a clear plan in place to make sure this situation never happens again. Bringing on a new contractor to operate the ferries is a good start, but the RTA also needs to clearly communicate new processes and procedures with the public so the public can begin to regain trust that the ferries will be a long-term and reliable option moving forward.