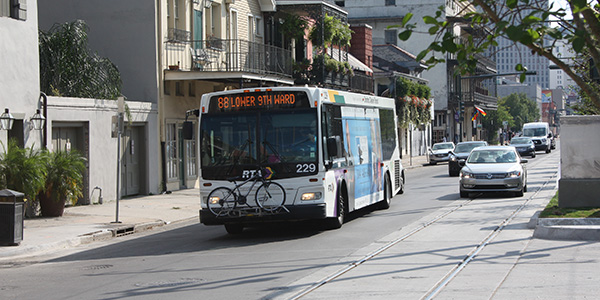 Last month was jam-packed with hot weather and transit news for just about every mode of transportation!

Read on below for an update on how we’ve worked on your behalf to get better bus, streetcar, and ferry service for New Orleans.

The New Orleans Regional Transit Authority’s (RTA) upper management has a new look with the recent appointments of City of New Orleans Safety and Permits Director Jared Munster as interim executive director and longtime RTA Commissioner Flozell Daniels as chairman. Munster’s appointment ends an almost year-long period without an executive director to oversee Transdev, the private company the RTA currently contracts with to operate and plan transit service. Better transit needs more oversight, transparency, and public accountability, so a new executive director is a definite step in the right direction. Let us know your thoughts on the recent changes and how you’d like to management structure to look.

Consultants to the RTA held two open house sessions in late May to present additional details about what a streetcar extension to Press Street and down Elysian Fields would look like. We have been opposed to this study as an expensive distraction from bigger and more pressing issues and our disappointment continued at the open houses. The study only looks at a very narrow part of St. Claude and Elysian Fields and thus far does examine whether an extension is even needed from a system-wide stance. With limited funds, it is crucial that we dedicate resources to areas that will most improve quality of life for transit riders. This study is expected to conclude later this year and our current ask is that the RTA board does not approve any additional funding for this expansion until the next steps of the overall RTA Strategic Mobility Plan determine what long-term investments are best for the entire St. Claude corridor. If you’d like to make your voice heard, please sign our petition asking for a more comprehensive solution along St. Claude! You can also weigh in directly with the RTA’s consultant team at streetcarstudy@norta.com.

Good news! The RTA secured a federal grant that will provide $2.4 million to update the Algiers ferry terminal.  Details about how the funds will be spent aren’t set in stone, but early signs show that the funding will help provide much-needed updates to amenities like A/C, real-time information, a new roof, and additional infrastructure needs to accommodate two ferries. The RTA has pledged to make decisions around the improvements in a collaborative, open process with ferry riders. We will keep you updated as the process develops!

The outdated New Orleans bus stop policy that prevented the RTA from effectively installing bus shelters and benches was finally repealed at the outgoing city council’s last meeting on May 3. Now that this hurdle is out of the way, the RTA and their contracted operations team can start installing shelters and benches again throughout much of the city. We have asked for the plan to address the backlog of shelters and benches and expect to hear concrete details this month. We’ll keep you updated and please sign our petition to prioritize bus stops and shelters

In case you missed it, the Times-Picayune featured the story of a transit rider we met while canvassing. Judy Stevens lives in Michoud and has a three-hour commute to and from work at the Ochsner Medical Center on Jefferson Highway. From inconvenient transfers, to uncoordinated bus schedules, to low-frequency lines, regional transit riders have a lot to deal with. There are some signs of hope, though. The inter-parish day pass will be revived last this year, bringing much more convenience to many riders. And JeT has launched its own long-term strategic planning process to plan for better transit in the coming years – please let us know if you’d like to receive special updates on that process as it continues to unfold.

The RTA has had a busy few months, and we’re excited to provide an update for you – and get a chance to relax and touch base in person! So join us on Thursday, June 7 from 6 to 8 p.m. for our summer happy hour. With all the talk about the St. Claude corridor, we thought it was appropriate to head back to Junction Bar & Grill at 3021 St. Claude Ave. Hear what we have to say about the streetcar study, RTA transitions, and other recent transit news. We hope you’ll join us and raise a glass with your fellow transit riders and advocates. You can RSVP here to let us know if you can make it!