You can review the three New Links concepts at newlinksnola.com. Please be sure to fill out the survey to tell planners what you think before the end of March!

Keep on reading for a summary of where we’re at in the New Links process and why this phase of New Links is so important.

New Links is important because transit isn’t working like it should and that has real effects on thousands of riders.

People get fired for showing up late to work too many times. Others can’t consider taking certain jobs or starting a class because they can’t get there in a reasonable amount of time.

Meanwhile people who can afford other choices will almost always take them, costing the RTA and JeT money that could be used to put more buses on the street.

Ride New Orleans pushed for the start of the New Links network redesign because we want to see improvements, but we know it’s not enough to just make a tweak here or there.

We need to see comprehensive changes across the region that result in across-the-board improvements. But we also know that at least in the short-term we’re not going to see new funding for transit. That means real improvements will only come using available funding.

New Links began in early 2019. Last spring and summer, the New Links team held a series of community meetings asking riders and community members to talk about their most important transit priorities.

The most popular priorities aren’t surprising – they’re exactly what RIDE hears every day. Riders want to see transit that’s reliable and on-time, transit that’s much more frequent, and transit that gets you more easily to more important places around the region – no matter what side of the parish line they’re on.

The New Links team wants to gather feedback on each concept and use that feedback to craft a final plan that will be presented to the RTA and JeT later this year. You can read below for a summary of each concept and you can view them in more detail at newlinksnola.com. 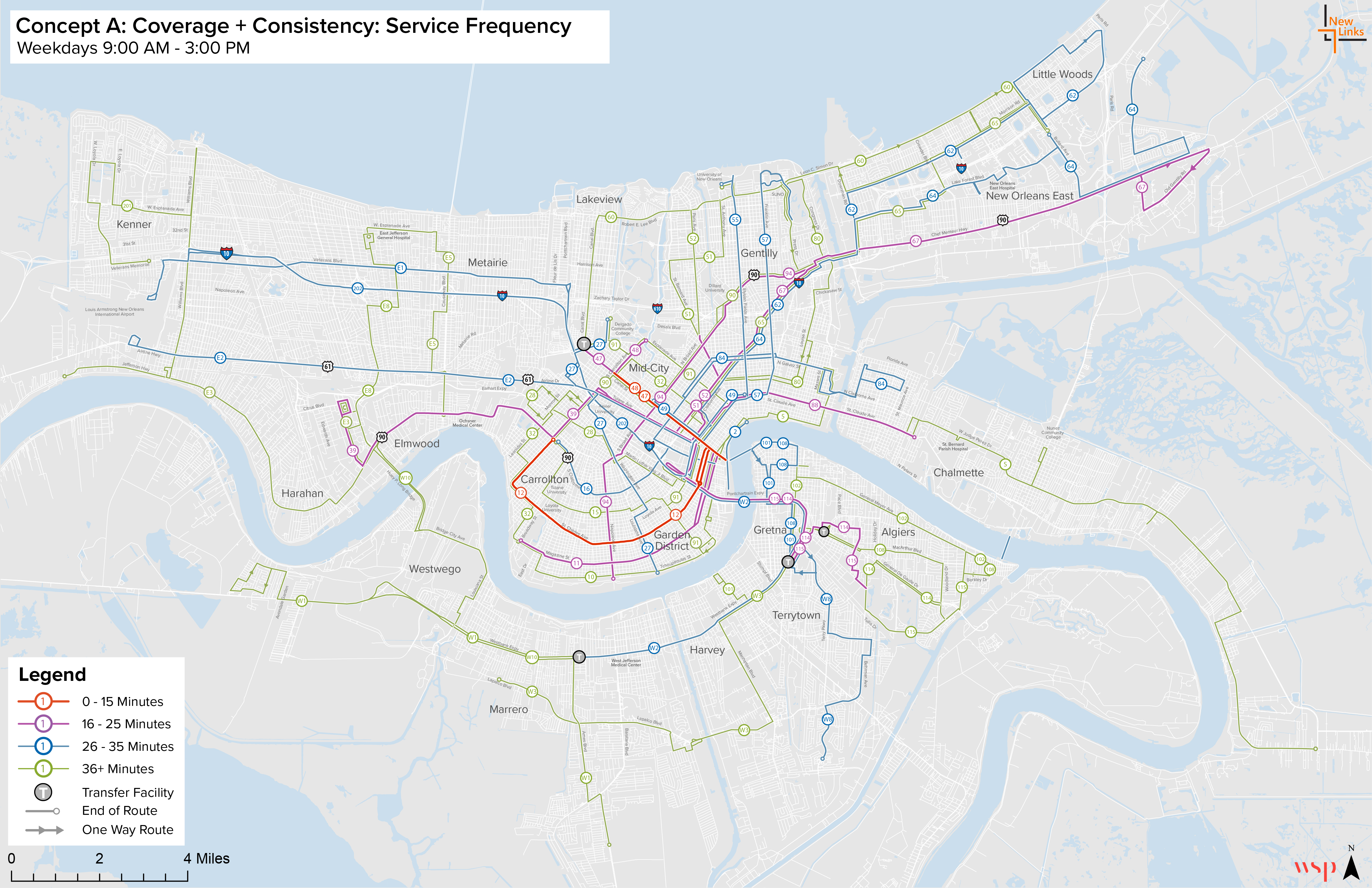 Concept A promises increased on-time performance throughout the system. To achieve that, schedules are slowed down to be more realistic with today’s travel times. So buses that may have come every 45 minutes before, would now come once an hour. The tradeoff would be less overall service on many lines, but a much more reliable timetable.

Concept B promises greatly increased frequency – every 15 minutes-or-less, seven days a week – on many of the highest ridership lines, like the Morrison, St. Claude, or General DeGaulle. This would mean the majority of today’s riders would have a much faster and reliable trip to wherever they need to go. To achieve that, routes are streamlined and service is shifted from lower demand routes – especially in areas where more people have other options. The tradeoff is greatly increased service and reliability on the busiest routes with the biggest needs for transit service, but less service on lower ridership routes and some people would need to walk further to get to transit service. 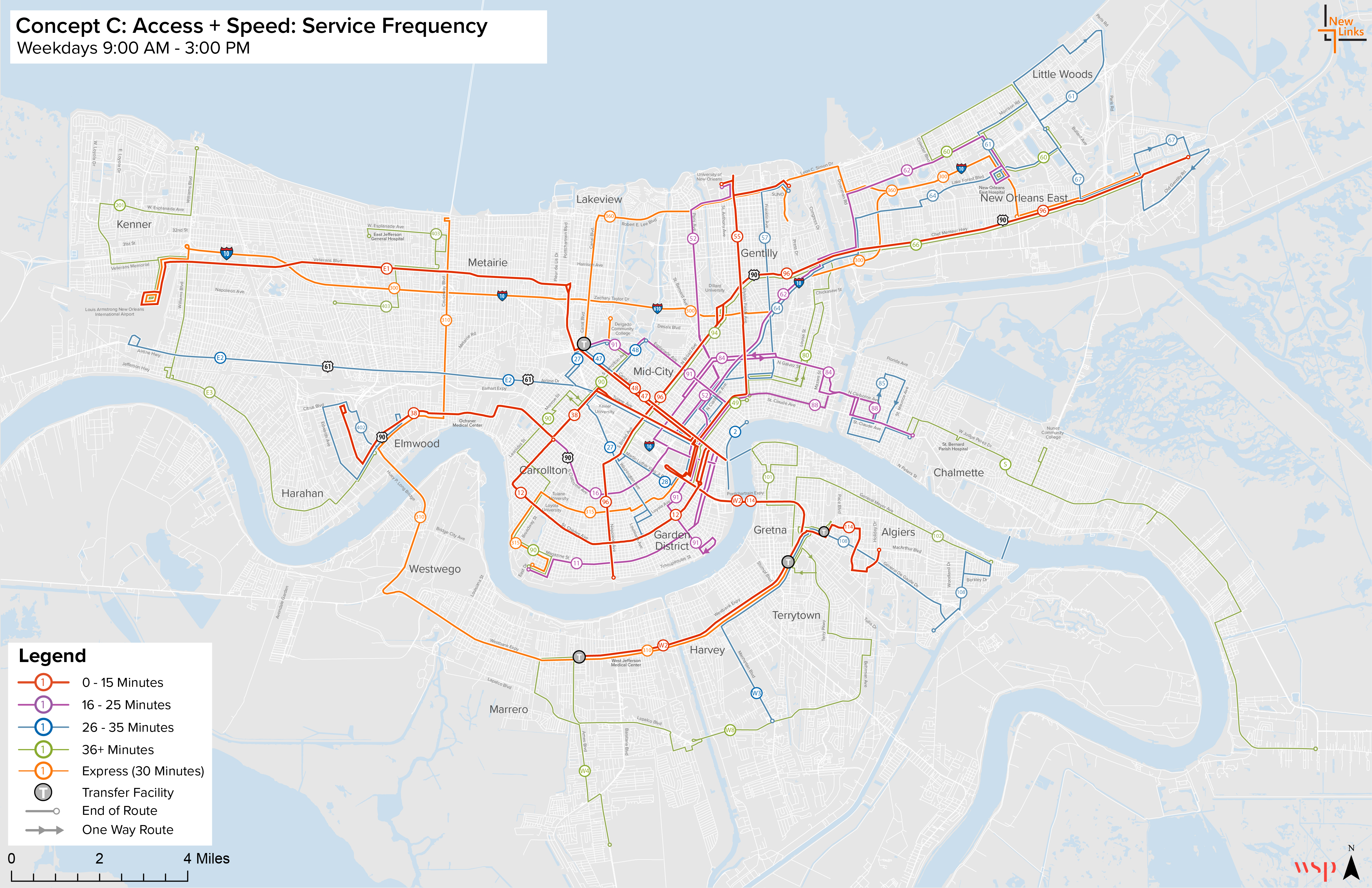 Concept C promises greatly improved regional service – making it much easier to quickly get across long distances. Ideas proposed include a direct express from New Orleans East to the airport and the West Bank to Lakeside Mall. More lines come every 15 minutes-or-less, but stop every four to six blocks instead of every one to two like they do today. To achieve that more routes connect to local hubs where riders can transfer to frequent or express buses. The tradeoff is greatly increased regional connectivity and frequency, but more transfers and some people would need to walk further to get to transit service.

None of these concepts are immediate proposals for new service. Rather, they’re designed to help advance the conversation and show riders and the overall community what different options and tools are available to improve transit service – using existing funding.

RIDE has not taken a position on any of these concepts yet. We see many potential positive  and creative changes in each. What we’re most interested in right now is hearing more from riders what they like in each concept, what concerns them, and what tradeoffs are worth further consideration.

So please take a look at the full concepts at newlinksnola.com.

And let us know what you think at info@rideneworleans.org!