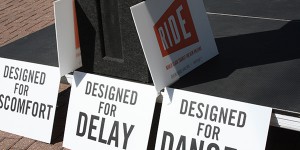 We got some good news yesterday!

The Council and Mayor’s office both publicly pledged to fund and build a new pedestrian bridge over the freight railroad tracks near the Canal Street ferry terminal.

Most importantly, they pledged to do so in the same time period as the construction of the new ferry terminal. The pledge came via a Council resolution and the public assurances of the Mayor’s office.

We want to send a big ‘thank you’ to all the Councilmembers for their pledge yesterday – and our gratitude to you and the hundreds of other residents who made this happen.

This is a really important win that didn’t look possible several weeks ago.

Now, transit riders likely won’t have to face a big step backwards in transit accessibility and reliability. That was our greatest fear when we first saw that the plans for the new ferry terminal called for the elimination of the existing pedestrian bridge.

But it’s important to stress this isn’t a complete victory yet. We still have several concerns:

But, for the moment, we are happy that one of the biggest issues is on track to being resolved.

We’re looking forward to working with city officials, Algiers residents, and transit riders throughout the city to make sure that this story does indeed end with a win for New Orleans transit.