RIDE has long advocated for providing more opportunities for the community to engage in the RTA’s planning and decision-making processes.  For their April Board meeting – the RTA did just that!  RIDE commends the RTA Board for moving their regularly scheduled meeting to 6pm in order to allow participation from riders and community members who work a nine-to-five and many others who wouldn’t otherwise be able to make it.

We want to give special recognition to the 30+ community members who attended, gave feedback and shared their ideas for improving transit service with the RTA Board members.  You, the everyday riders of transit, spoke up for a number of important issues, including: 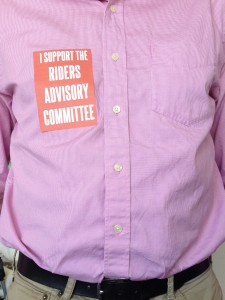 In fact, members of our grassroots action team reached out to their neighbors and turned out 25 people to the meeting, all wearing big red stickers proclaiming “I support the Riders Advisory Committee”.  Though the RTA adopted a policy creating a Riders Advisory Committee and solicited applications from riders more than a year ago, the committee has not yet been appointed or convened. This important policy institutionalizes a process for users of transit ways to inform and connect with the RTA Board.

Despite many calls for the committee to be implemented, the RTA Board remained silent on the issue at Tuesday’s meeting.  However, RIDE wants to thank and acknowledge RTA Board Member Flozell Daniels, who has offered his support and leadership in championing implementation of the Riders Advisory Committee – most recently, he met with members of our grassroots action team and committed his support to seeing it through.

So what’s next and how can you stay involved?

Join RIDE’s grassroots action coalition!  We are a diverse group of residents, riders, and community leaders working to improve our transit network, connect people to opportunity, and enhance our quality of life. Right now, our focus on seeing the Riders Advisory Committee through to implementation, and together, we’ll identify future action campaigns to improve transit in the NOLA region.  Sign up to join our action coalition today!