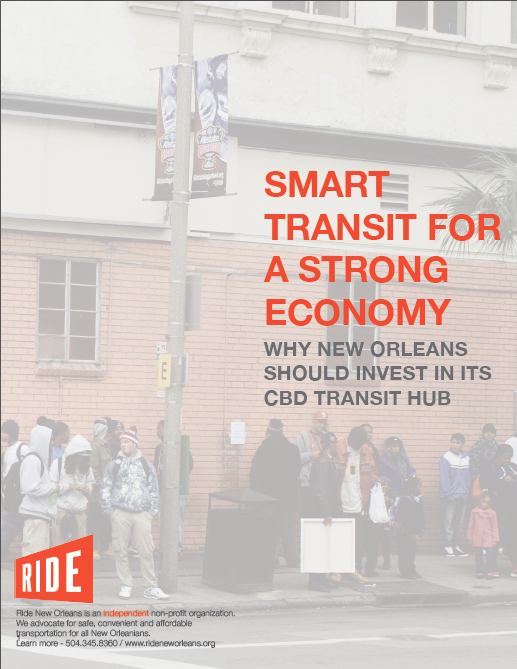 CLICK HERE TO READ OUR REPORT – SMART TRANSIT FOR A STRONG ECONOMY: WHY NEW ORLEANS SHOULD INVEST IN A CBD TRANSIT HUB

In November of 2012, volunteers with Ride New Orleans canvassed more than 200 passengers waiting for the bus at several street corners in the Central Business District where more than 20 regional transit lines converge.  Centered around the intersection of Elk Place and Tulane Avenue and reaching out to intersections as far as 1/3 of a mile away, these transit stops function as a downtown transit hub.  Every day, between 5,000 and 7,000 transit riders on- and off-board there making this transit hub an important center of economic activity.  To the rest of New Orleans, the area has none of the features one would expect of a modern transit hub.

Regional residents using this transit hub are nurses, patients, waiters, revelers, construction workers, students, tourists, professionals, and senior citizens.  The residents and visitors transferring at this point have such limited seating options – 30 seats altogether – that sidewalks quickly become overcrowded.   With limited basic infrastructure serving thousands of people, the area is chaotic.  Potential shoppers and commercial tenants avoid the area, in turn creating a challenging environment for businesses and property owners to operate.  Vacancy and blight are common along the commercial corridors that line the busy transit stops. 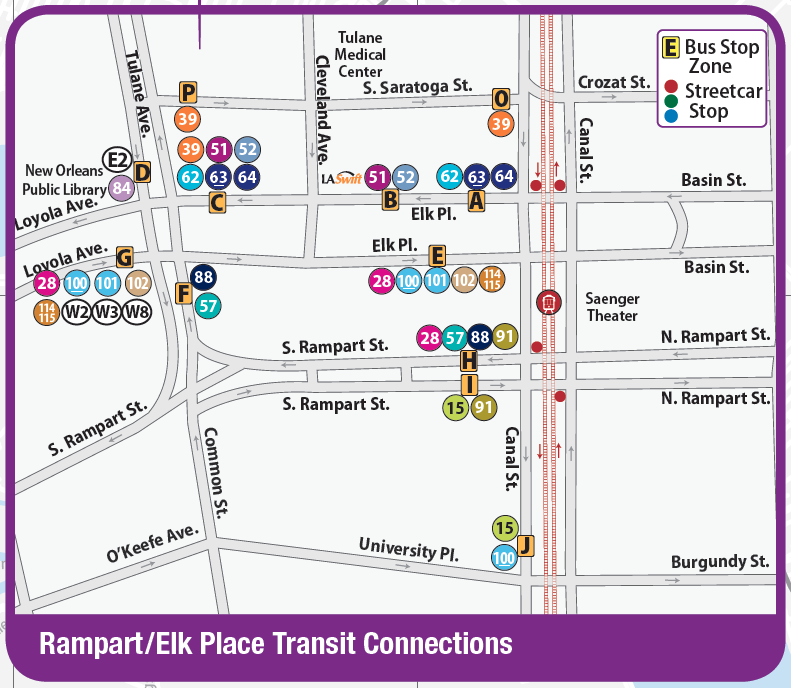 Today, we are excited to release our report, “Smart Transit for a Strong Economy:  Why New Orleans Should Invest in a CBD Transit Hub“.  The report highlights the current situation at the downtown transit hub, features solutions from other cities that have taken advantage of federal funding opportunities and public-private partnerships to invest in their downtown transit hubs and supports our position that we must re-imagine our central transit hub as more than just a utilitarian place for buses and passengers, but as a gateway into the surrounding community through which many citizens and visitors pass.  As such, it deserves to leave a powerful impression as a matter of civic pride.

To coincide with the report’s release, we’ve organized a day of grassroots action, taking place from 3:00 – 6:00 PM today, Tuesday, April 15th on Elk Place between Canal Street and Tulane Avenue.  We will place 200 chairs out at the various bus stops giving transit riders a comfortable place to wait. Ride New Orleans will be joined by public officials to sit with riders, and begin a solution-oriented community dialogue.  We hope that you’ll join us in calling for smart transit infrastructure at the heart of our regional transit system.

CLICK HERE TO READ OUR REPORT – SMART TRANSIT FOR A STRONG ECONOMY: WHY NEW ORLEANS SHOULD INVEST IN A CBD TRANSIT HUB

4/23 UPDATE: Check out the media coverage of our day of action!

Group Says RTA Bus Stops Not Up to Par