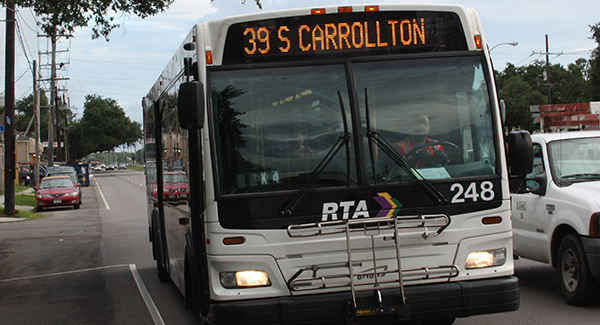 A whole lot has been happening in New Orleans region transit over the last few months!

Read below to get caught up on some of the key moments.

One big RIDE critique of New Orleans transit  in recent years is that EVERY part of New Orleans Regional Transit Authority (RTA) operations has been contracted out to a private company, Transdev. That’s made it much harder for the public to know exactly what’s going on and much harder to make our voices heard for change. But a big shift is in motion thanks to residents like you speaking up. The RTA board voted last week to make all senior and administrative positions public starting next summer. This will be a big boost for RTA transparency, accountability, and continuity – resulting in better day-to-day service for riders in the future! Read up on what happened and stay tuned, we’ll have more to say on this in the next few weeks!

The #39 Tulane bus extension across the Jefferson Parish lines to the Ochsner Medical Center on Jefferson Highway launched on September 30. For years we’ve advocated for better regional access for riders to get back and forth across parish lines. This extension is a huge step and a big win for riders like who will save significant time on their commutes. Even better, the #16 Claiborne bus, which runs through the CBD up Poydras and then toward Jefferson Parish on S. Claiborne was expanded to 24-hour service at the same time!

According to a 2015 study, at least 11 percent of RTA bus stops don’t even have signs to identify them as bus stops! In the better-late-than-never category, that’s finally starting to change. The RTA says that ALL stops will have signs by the end of November and recently passed the halfway point its bus stop sign replacements across the city. To date, nearly 1,400 of the 2,222 stops have the new signs. We’ll continue to push for a more consistent process that improves how signs are replaced when they go missing or routes need to change. If you see any new signs missing, let us know or call the RTA Rideline at 504-248-3900.

RTA and JeT launched a joint call center on November 4

The RTA and Jefferson Transit (JeT) announced another regional win for riders. On November 4, riders will be able to call one number, 504-248-3900, to receive information on schedules and bus arrivals for both systems.  Riders should not be penalized for not knowing whether their bus is under RTA or JeT — they just want the information that will help get them where they need to go. We applaud this positive step toward a truly regional transit system.  We will keep you updated on any additional regional transit progress, but if you have ideas for more regional connectivity, let us know!

The RTA secured federal funding to purchase an additional 17 buses to add to its current fleet of 136 fixed-route vehicles. While 17 new buses won’t fix all of the problems with route frequency, it is a step forward, and it will certainly help some riders. Our system is still operating with less than half of the fleet that existed pre-Katrina. This is a great chance to consider how we will pay for more vehicles because we will soon need to phase out aging vehicles that are still on the streets today. We will keep you updated on future funding conversations and plans for the buses.