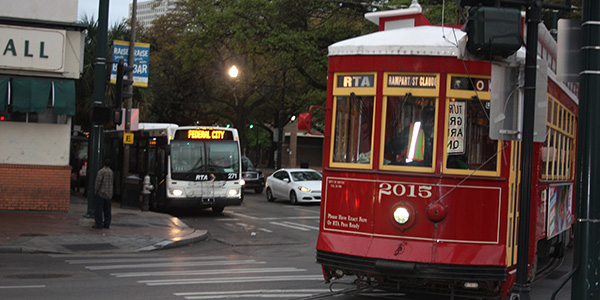 Consultants to the RTA presented their findings from a months-long study to extend the Rampart/St. Claude streetcar tracks along St. Claude and down Elysian Fields on Aug. 21.

So on the positive side, we were glad to hear contractors to the RTA say there will be no movement on this proposal unless the upcoming Comprehensive Operations Analysis (COA)/network reimagining process concludes that it makes sense.

RIDE opposed this study for a number of reasons – leading with the fact that we don’t think this expansion proposal would lead to good transit service!

But another key concern was that the study seemed to ignore the RTA’s recently-finished long-term transit plan, the Strategic Mobility Plan (SMP) – which did not mention any streetcar expansion. The news that nothing will proceed at least until the COA is complete eases one big fear – that the RTA would push ahead on this expensive project without any sense of how it ranks among other, more needed improvements or disregard the SMP entirely.

However, that doesn’t mean this streetcar extension proposal is dead, but possibly only deferred. That’s still a potential problem for riders down the line.

More fundamentally, even if the proposal is shelved and doesn’t make a reappearance over the next few years, it was still very disappointing to see the amount of time and money spent on such a small segment of the transit system. Basically, the public is paying up to almost $800,000 to study something that the RTA has not declared a priority – so it’s cold comfort to note that at least it might not move forward.

RTA consultants say that some of the data will be able to be used to propose solutions for the St. Claude corridor as a whole and could expedite capital projects later on – even if a non-streetcar mode is selected for transit investments along St. Claude.

That’s good to hear, but even so, the study was an expensive missed opportunity to expand on the important conversations in the SMP planning process like improving access to jobs, improving on-time performance, and improving the rider experience overall, among other important topics.

Despite all of the money spent, the public-facing portion study only focused on whether we could expand the streetcar – not whether we should. There were pro forma acknowledgements that not everyone wanted streetcar expansion, but no real public exploration or discussion of whether streetcars were even the best option for quickly moving the most people along the corridor or how streetcar expansion might affect residents. For residents who need more transit investment in order to get to work more quickly, there was little substance offered during the process to help them better understand their options for the future.

The public findings released on August 21 further reflect this.

For example, the top benefit listed on the presentation board for the Elysian Fields extension alternative (which would hypothetically connect the St. Claude/Rampart streetcar line with the Riverfront line down Elysian Fields) is a “one-seat ride” from the Union Passenger Terminal (UPT) to the Convention Center. That would be via a long U-shaped route that would take at least 35 minutes to connect two destinations that are less than a mile apart. While that might be an interesting ride for tourists, it’s not a serious proposal for improved transit and shouldn’t be pushed seriously as a plus for people who need to rely on the RTA system – let alone as a key benefit.

Other presentation boards touted 24/7 service for the proposed streetcar lines – without noting that the Rampart/St. Claude and Riverfront lines currently only runs until midnight or discussing what the cost might be in context of the RTA’s current operating budget or other pressing priorities.

This missed opportunity to dive deeper into what investments make sense for our transit system is unfortunate and validates the original skepticism RIDE had for this study. The RTA board should clearly note these issues and make sure that future projects in this critical phase of our comprehensive transit planning efforts do not follow the same path.

But with the money now spent, we do sincerely hope that some good can come from the data collected as we (hopefully) move toward a quick start and effective implementation of the COA/network reimagining process that is the immediate centerpiece for implementation of the next steps of the SMP.